Here is the Transcript of the Presentation by Manolo Bellotto, Ph. D

Our GBA program targets beta-glucocerebrosidase, or GCase to be more simple, to address two diseases, neuronopathic Gaucher and Parkinson’s. As introduced also in the last presentation, misfolded GCase can be caused by genetic mutation or age-related stress is known to result in neuronopathic Gaucher and to predispose to early onset and fast-progressing Parkinson’s disease. Misfolded GCase leads to the accumulation of glucosylceramide in Gaucher and of alpha-synuclein in Parkinson’s, as well as glucosylsphingosine. Currently there are no cures for either diseases and very limited treatment options, largely directed to symptoms rather than the cause.

Our Parkinson’s program has been endorsed by the Michael J. Fox Foundation and the Silverstein Foundation, and with this program we are targeting over 7,000 Gaucher patients and over 2.4 million potential Parkinson’s patients worldwide. Misfolded GCase present in the ER generates ER stress and the protein quality machinery we recognize it as faulty and thus will undergo degradation. As such, it will not reach its final cellular localization, the lysosome, at sufficient quantities to properly process its direct (inaudible) which will accumulate and lead to the molecular onset of Gaucher and of Parkinson’s, as well as through the accumulation of alpha-synuclein.

Gain is developing Structurally Targeted Allosteric Regulators that target a uniquely identifiable allosteric pocket on GCase. These molecules are stabilizing the misfolded GCase, which as such will not be degraded by the protein quality control and will reach the lysosome, where they will properly process the otherwise toxic substrate, avoiding their accumulation, thus counteracting cell death associated with the onset of Gaucher and Parkinson’s diseases. We have been performing mechanism of action in vitro and in vivo proof-of-concept studies, including also patient-derived iPSC study that Professor Feldman will be presenting to you shortly after my presentation.

The overall results indicate that both molecules are able to stabilize GCase and the ER facilitates it maturation and localization to the lysosome to increase GCase protein levels. This in turn is leading to decrease of GCase (inaudible), glucosylceramide and glucosylsphingosine, as well as alpha-synuclein in its most pathological relevant form. This translates in a neuroprotective effect and reduction of behavioral marker in relevant Parkinson’s model I will be presenting you shortly. Next I will present to you initially in vivo data that we have been generated in a rotenone rat model. Rotenone, as you might know, is in use in accumulation of synuclein into the rats, which relates and follows to loss of dopaminergic neuronal behavioral deficit.

In the next slides I will be presenting to you data supporting of alpha-synuclein depletion, improved neuronal activity and locomotion. In this slide I am presenting data indicating that GT-02287 decreases with statistical significance in a dose-dependent manner alpha-synuclein accumulation in substantia nigra, as you can see reading the blue bars, when measured in both total and phosphorylated synuclein. 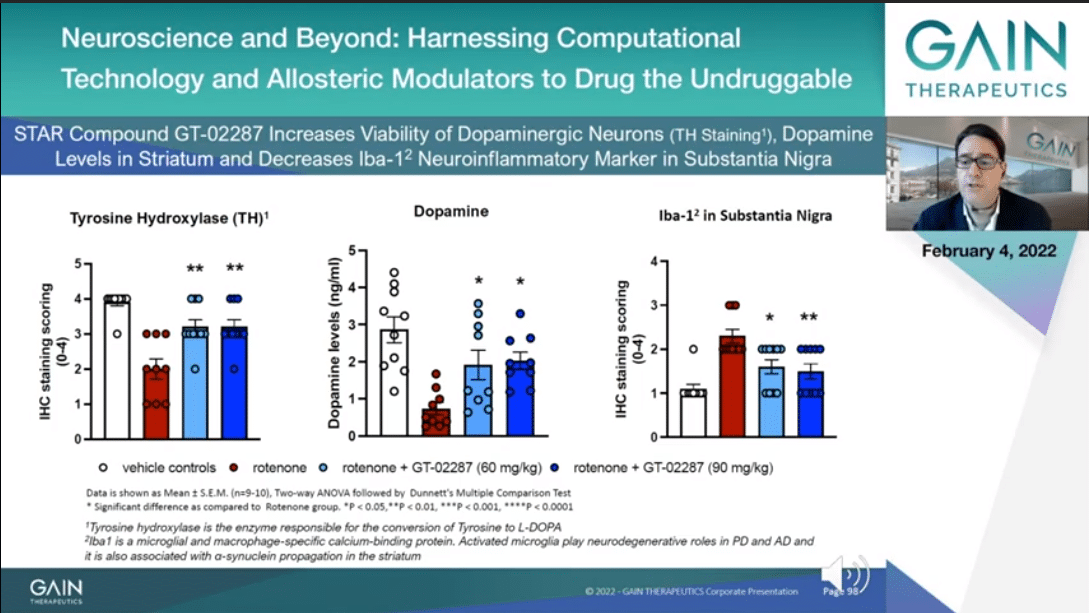 To your far right, you can appreciate that GT-02287 induces the reduction of irrelevant neuroinflammatory marker, namely Iba1-2, which is a specific marker of microbial inflammation, a relevant aspect both in Parkinson’s and in Alzheimer’s as well.

In the next slide I will be showing the effect of GT-02287 on locomotion. If you can activate the video, please. To your left you can see a comparison between non-rotenone injured rats, rotenone injured in the middle of the videos, and rotenone injured plus 2287. As you can appreciate also from the activity track map to your right, GT-02287 rats have a more normal locomotion pattern resembling the non-sick rats. In conclusion, the drug properties and in vitro and in vivo proof-of-concept studies are supportive of GT-02287 and GT-02329 to be candidate drugs for Parkinson’s and Gaucher, respectively. Therefore, we are starting to conduct clinical regulatory studies this year that will allow us to submit HREC filing. We’re then starting a healthy volunteer Phase 1 study for GT-02287 in Parkinson’s. This year we will also commence preclinical regulatory studies for GT-02329 so as to prepare then in 2023 HREC submission for a first-in-human study for the Gaucher indication as well.